Touma Onizaki is a protagonist of the series he is a descendant of the oni.

Touma is an only child and his parents died when he was a young age as a result he was raised by relatives. It was rumoured he was expelled from his previous High School and transferred to Seinaru. Touma has a crush on Saya however denies it. It is later revealed that Touma accidently killed his parents as a result of his powers and he blames himself ever since they he carries around a locket with a family picture in it.

Touma acts like a lone wolf and has a reputation of being a bad boy which often causes him to get scolded by either Saya or Shinogu however he always says mean things to Saya and ends up hurting her feelings when he doesn't mean to. He has a crush on Saya however he often denies it and can go red with her around him. He has a hard time controlling his oni powers and often loses control.

Touma has orange hair and dark pink eyes, Touma wears the Seinaru uniform with a twist he wears a red dress shirt underneath the blazer. Touma's casual clothes consist of a black leather jacket over a grey skull t-shirt with that he wears a pair of jeans with a white belt and for decoration a brown accessory and he concludes with a pair of black shoes. 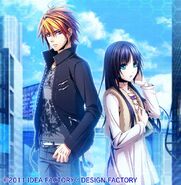 Touma & Saya in the infirmary.

Touma getting teased by dolphins

Meeting Touma for the first time.

Touma eating cake.
Add a photo to this gallery
Retrieved from "https://hiironokakerashintamayorihimedenshou.fandom.com/wiki/Onizaki_Touma?oldid=4264"
Community content is available under CC-BY-SA unless otherwise noted.